European Green Deal and the future of EU railway

The year 2021 was announced by the European Commission as the European Year of Railway, an initiative that aims to encourage rail usage by citizens and businesses and to highlight the benefits of rail as a more sustainable and safer mode of transport.

Born in the context of the European Green Deal, the initiative is part of the Sustainable and Smart Mobility Strategy that aims for a reduction of 90% of greenhouse gas emissions in transport in the next 30 years, with the ultimate goal of the European Green Deal to reach a carbon-neutral economy in the European Union by 2050. Currently, transport is responsible for a quarter of the total greenhouse gas emissions in Europe. Railways represent only 0,5% of that number. "Rail transport has an undeniable green competitive advantage and, as such, may substantially contribute to the objectives of the Green Deal," says the report released by the European Union Agency for Railways. 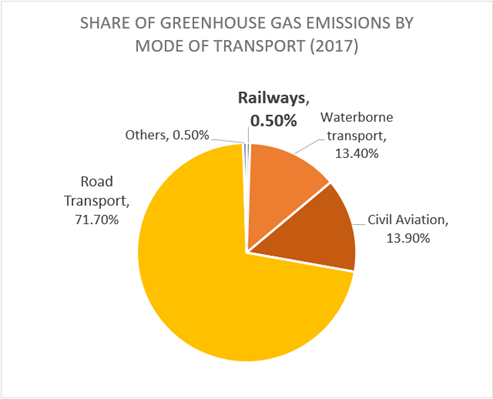 "The rail sector can provide substantial benefits for the energy sector as well as for the environment. By diversifying energy sources and providing more efficient mobility, rail can lower transport energy use and reduce carbon dioxide and local pollutant emissions." - Dr Fatih Birol, IEA Executive Director

The trend is known. The global demand for transport is expected to double in the upcoming years, representing an evergrowing increase in energy demand, which, by the current status-quo, will be impossible to attain in a sustainable manner. Rail is being boasted as a sustainable answer for this problem, and the European Union Agency for Railways is "making railway the backbone for the mobility strategy".

Contrary to the tendency of road transportation and international aviation, which, between 1990 and 2017, increased its emissions by 170 Mt CO2e and 89 Mt CO2e respectively, the railway direct emissions declined by 66% in the same period, due to the electrification of the railway network. The further development of the railway network will only contribute to reducing even more these emissions, considering only 55% of the European network is electrified. Luxembourg being the only country with over 90% of electrified network.

With great movement comes great energy importation (but not necessarily)

Regarding energy independence, by 2017, over 50% of EU's energy was imported. Since 1990, the increase in aviation, road and maritime transportation energy consumption was followed by an increment of greenhouse gas emissions. To maximize the level of independence, the EU needs to invest in modes of transportation that depend on greener and internally produced energy. The answer is railway. In 2016, railway was the mode of transportation responsible for 11.2% of freight and 6.6% of passengers of all transport modes (land, air and waterways), while being responsible for only 1.7% of total EU energy consumption in transport. 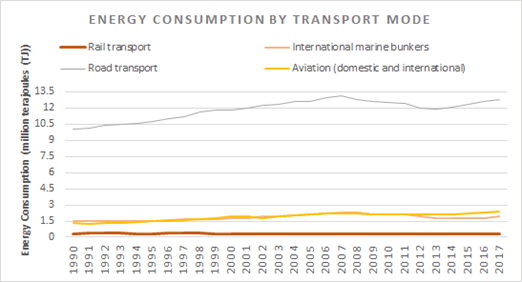 While cars, buses and trucks have a life expectancy between 8 to 15 years, the life expectancy of rolling stock is, in general, a lot longer. Railway vehicles can deal with more intensive use, travelling more kilometres and serving at the same time a larger number of passengers and freight.

Poor air quality was responsible for over 400,000 premature deaths across Europe in 2018, according to the latest report of the European Environment Agency. Although the air quality was improved in the last decade, the numbers "are still far too high", said Virginijus Sinkevičius, Commissioner for Environment, Oceans and Fisheries. In this sense, the railway sector is being singled out as the most beneficial mode of mass transport, and its usage should be emphasized as a way to reduce the ill effects on human health and ecosystems due to poor air quality.

Rail is seven times more energy-efficient per passenger than car travel in cities. Car and flight transportation are some of the main contributors to greenhouse gas emissions. While car emissions are around 102g CO2/ per Km and flight around 244g CO2/ per Km, train accounts for less than 28g CO2/ per kilometre while transporting a larger number of passengers. Considering the fact that the average occupancy of a car in Europe is 1.2 for work/home commuting and between 1.4 and 1.7 for family trips, it is clear the advantage of train regarding average consumption per passenger-km (only 0.12 kWh in train). On top of that, traffic congestion is a reality in a lot of cities, which represents an enormous amount of costs. Traffic congestion cost has been estimated in 2013 at around 18bn Euros in France and around 28bn Euros in Germany and, by 2030, could reach, respectively, 24bn and 36bn Euros.

THE FUTURE OF EU RAILWAY

What can we expect from the European Green Deal regarding Mobility? Although five industrial sectors are being targeted (Energy, Housing, Industry, Transport and Agriculture), the transport sector is considered the key one when we talk about reducing the dependency on carbon-based fuel. Regarding this, the strategy is one and its message is clear: to increase the market share of railway and to make it the king in mass transportation and freight.

In order to achieve the goal of the European Green Deal, the EU Agency for Railways rolled out an action plan and several milestones promising to shape the future of the railway sector.

It is planned to be implemented several new high-speed connections across Europe, expecting to increase rail usage and, optimistically, a decrease of CO2 emissions by 89%.

Although most of the largest airports in the EU are already connected to a railway network there are still some without connection: Dublin, Budapest, Alicante and Bucharest.

Despite recently being less common, night trains were in the 1980s an efficient alternative to travel in Europe, and there are now new opportunities to increase this kind of service. The strategy will include reducing charges on track access for night trains and supporting investments for new rolling stock for night trains.

In 2018, the European Commission issued a study to identify railway missing links on the internal EU borders, pointing out 149 connections that are non-operational nowadays. One of the conclusions of the study was the need for funding, intended to increase the investment in infrastructure and rolling stock on cross-border connections.

Foster the digitalisation of railway

It is estimated that digitalisation can increase infrastructure capacity by 20% to 50%, depending on traffic type and signalling used. The project ERTMS ("European Rail Traffic Management System") is being implemented by the European Union in order to make rail transport more competitive and safer and to contribute to a more integrated European railway system.

5G is becoming the new standard for broadband cellular networks and with it comes new promising areas of development in railway. The sector, in conjunction with the International Railway Union, is currently cooperating with the European Telecommunication Standards Institute (ETSI) and the 3rd Generation Partnership Project (3GPP) to standardise the 5G-based Future Rail Mobile Communication System (FRMCS) as the successor to GSM-R. With high-speed internet networks, it will be possible to create more predictive maintenance models, develop better multimodel ticketing and enhance voice and data applications to support intelligent sensors and smart metering.

The use of highly sophisticated and intelligent software systems to plan, schedule and manage rail operations in an optimised way supports and allows for better decisions that impact positively rail operators' performance as well as the environment. Optimised operations guarantee not only a more energy-efficient use of the resources (human and material) but also a reduction of costs.

Artificial Intelligence, a key player in the process of predicting and achieving better resource scheduling and optimisation of train operations, is nowadays paramount in such decision-support solutions. An example of such optimisation systems, based on ONTIME and FLEET, is the one used by VIA RAIL Canada resulting in a win-win situation - it helps the company save millions of Canadian Dollars and become more energy-efficient and environmentally friendly, while at the same time increasing revenue and producing better train timetables to satisfy passengers. 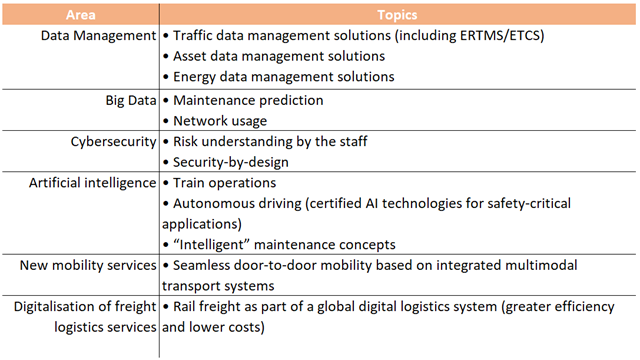 Create a ‘Eurocontrol’ for rail

There are plans to create an EU agency constituted by Member States representatives to oversee the definition of general policies, budget and programs that will allow a proper and holistic approach to the European railway. This authority will foster the development of the EU rail network, coordinating the different national traffic management centres, ensuring rail traffic supervision and monitoring through structured and standardised approaches, at a European level.

Still under negotiations, the budget for the Connecting Europe Facility (CEF) 2021-2027 is yet to be determined, but a greater emphasis on rail and waterborne transport is intended, with an allocation on railway to be of over 30bn Euros. Projects like Shift2Rail were already funded to support the current EU railway strategy and a larger budget is expected for the future. On the 14th of October 2021, The Connecting Europe Facility support for railways event will be happening with an agenda intended to show the role CEF has played in the mobilisation of the necessary resources and its contribution to the achievement of the Single European Railway Area.

MILESTONES AND TARGETS OF THE EUROPEAN GREEN DEAL